Day 4
Namche Bazaar (3440m) – Tengboche (3870m)
This day started with a relatively flat walk, curving around the hills. The further you walk the better the views get. Soon Ama Dablam and Everest (amongst other beautiful mountains) come into view.

The trail then descends steeply for over 500 vertical metres. It was then I was glad to have a walking pole. This saved my knees, and shouldered some of the weight from my pack.

The worst part about descending around 500m is you then have to go back up the same 500m on the other side of the river. This was tough going and I was very relieved to reach Tengboche for some apple pie. 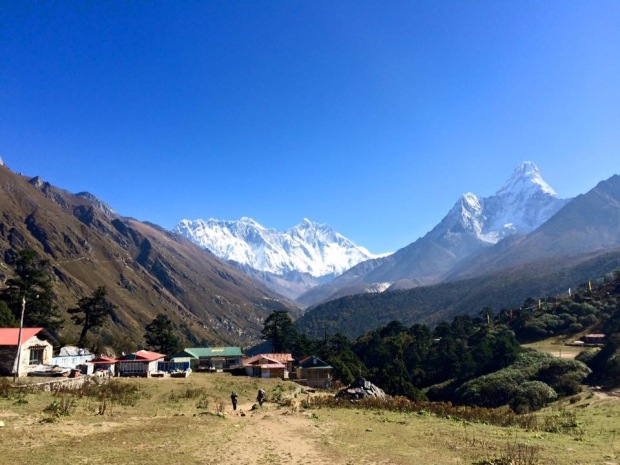 Day 5
Tengboche (3870m) – Pangboche (3985m)
After visiting Tengboche monastery first thing, we tucked into some breakfast and headed onwards to Pangboche. Most groups bypass Pangboche and go straight to Dingboche. However we were cautious about altitude and had extra days to acclimatise. If you’re making your own schedule I would recommend the extra night in Pangboche. Plus it meant another night in a room with an Everest view.

Day 6
Pangboche (3985m) – Dingboche (4410m)
During the ascent to Dingboche we were treated to some excellent views of Ama Dablam as we followed the river.

We made fairly steady progress until around 30 minutes outside of Dingboche. This ascent is well known for triggering altitude symptoms and my boyfriend fell victim to his first headache. We took it slow and made sure we rested once in Dingboche.

Our tea house in Dingboche was by far our favourite on the whole trek. It was called Moonlight Lodge and the owner is quite possibly the friendliest man I have ever met. Plus both he and his son have summited Everest!

Day 7
Dingboche (Acclimatisation day)
We walked up some nearby hills for extra acclimatisation and were rewarded with some truly wonderful views. After our return to Dingboche we treated ourselves to Hobnobs and a pot of tea. Living up to some serious British stereotypes!

Next post: Days 8 to 10 (Dingboche to Lobuche plus a bit of altitude sickness)

One thought on “Everest Base Camp Trek – Part 2”