On Saturday 25th April 2015 Nepal was hit with a 7.8 magnitude earthquake. This tragic event killed over 8,000 and injured many more.

At this point I had a flight to Nepal scheduled for 1st September – a mere 4 months after the earthquake. 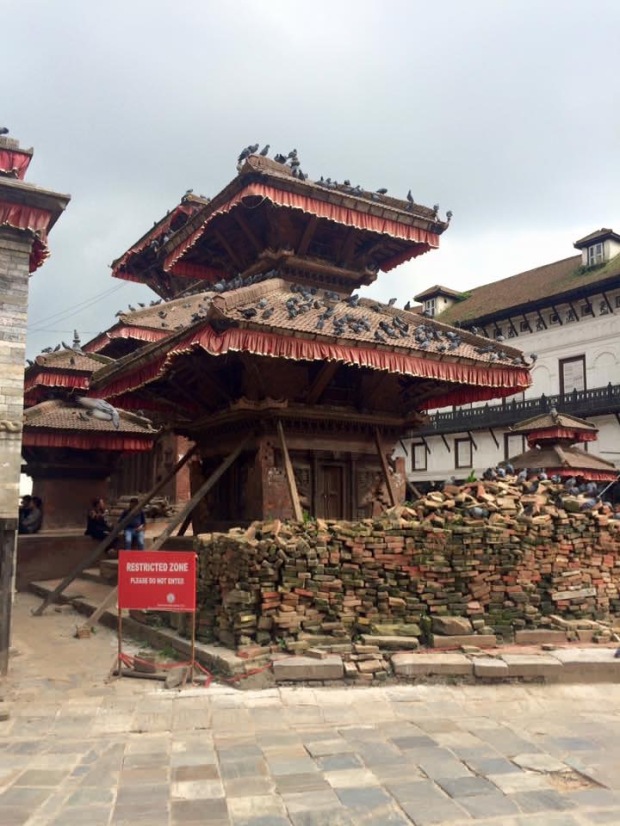 Durbar Square – older temples, such as those in Kathmandu’s Durbar Square, suffered serious damage due the age of the buildings. The media focused a lot on this damage despite this being unrepresentative of conditions in the rest of Kathmandu.

Many doubts filled my mind. Would it be possible to go? Would tourists be welcome? What will the infrastructure be like? Is it ethical to travel to Nepal at this time?

Reading advice on travel forums and Reddit I decided to persevere with my travel plans, and upon arriving in Nepal I was so glad I did. This is what I found:

Earthquake damage
There is damage to buildings in Kathmandu but Thamel (the main tourist area) is pretty much untouched. It is possible to find accommodation and tourist services are up and running. There is damage to the older temples, such as Durbar Square, but many are still standing. The majority of the damage is in smaller villages, generally not visited by tourists. That’s not to say the damage should be ignored, but don’t believe the media when they say the whole of Nepal is in ruins!

A typical street in Thamel with no discernible earthquake damage

It is safe
Yes there was a big earthquake, but that does not mean there will be another one any time soon. Many countries, such as Japan and New Zealand, also carry a high earthquake risk, but that doesn’t stop people travelling there. If it reassures you learn what to do in event of an earthquake (just in case). But my advice would be to relax and enjoy this beautiful country.

Nepal is welcoming tourists
One of my biggest worries was being thought of as a “disaster tourist” by visiting Nepal so soon after the earthquake. But my experience couldn’t have been more different. The Nepali people were incredibly grateful for tourists returning and urged me to tell other people to visit. I was there in peak season and was told the country had only seen 20% of its usual number of tourists. Given how important tourism is to the local economy this reduction is likely to have a significant impact.

The easiest way to help is to visit
Upon seeing disasters, such as the Nepal earthquake, on the news many of us are compelled to help. Unfortunately few of us have relevant skills to do something meaningful in such a crisis. If you have ever wanted to visit Nepal now is the time to go and give the local economy a boost!

One thought on “Travelling to Nepal after the earthquake”