Day 11
Lobuche (4940m) – Everest Base Camp (5364m) – Gorak Shep (5164m)
Finally the big day had arrived with Everest Base Camp less than 500 vertical metres away. After a truly awful cinnamon pancake we started to trudge to Gorak Shep. Apart from one steep, but thankfully short ascent the trail was fairly forgiving. Some ups and downs but nothing too severe. However the altitude gains continued to make it feel like a bit of a slog.

Upon arriving in Gorak Shep we grabbed a room, dumped our packs and fuelled up on snickers. Then it was off for the final stretch to base camp. 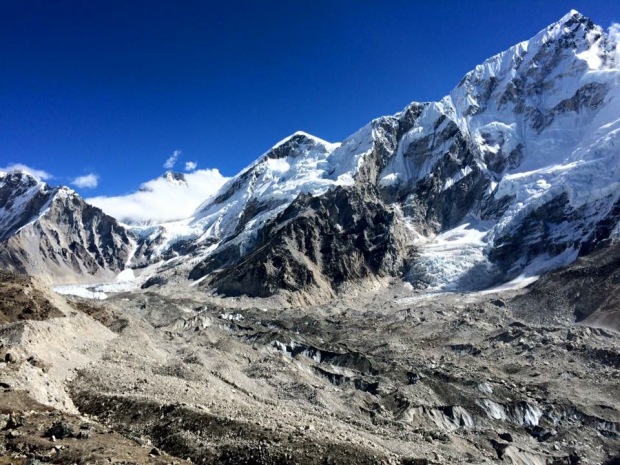 The route from Gorak Shep to base camp is a bit tricky to find without a guide as you’re walking along the glacier. So we loitered around until some other groups past and surreptitiously followed (very sneaky).

The trail itself got more challenging as well, with boulders to clamber over and patches of ice to avoid. At one point my water bottle soared clean out of my bag and down a scree slope. Too terrified to veer off the path to retrieve it I guiltily left it behind. Feeling awful, not just about now being a “litterer”, but also the prospect of becoming rather dehydrated at altitude.

Finally base camp was coming into view. But the trail started to become busy and narrow, making it hard to progress. Next thing I know I see a horse carrying an Indian tourist to base camp. Seriously – she was on a horse! I was well aware horses were available for emergency descents (plenty of ‘horse on hire’ signs around) but not to carry you up! Absolutely ridiculous.

Anyway not longer after we finally made it there. Took some ‘yay we made it’ snaps. And congratulated other up there. 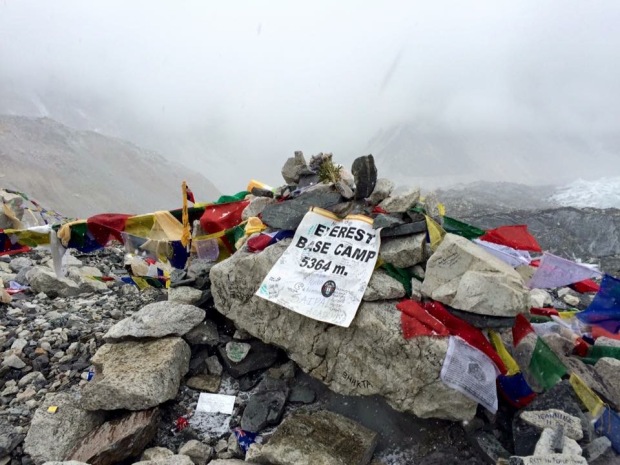 Feeling pretty rough due to a lack of water we started the trudge back to Gorak Shep. To my surprise and delight one of the porters had seen my bottle, scrambled down and picked it up for me. He recognised it as mine and waited on the trail to return it to me. Such a sweetie!

Back at Gorak Shep I forced down some momos before finally succumbing to a dehydration headache. Thankfully after lots of liquid and a little nap I was grand again and relived it was not altitude sickness.

It was a huge relief to have finally made it, but the long descent back to Lukla over the next few days loomed. What goes up, must come down!

One thought on “Everest Base Camp Trek – Part 4”