Without a doubt, the best way to travel around New Zealand is with your own set of wheels. It gives you flexibility and independence the buses and tour companies just cannot offer.

Should I buy or rent?
This is likely to be determined by the length of time you plan to stay in New Zealand. If you’re there for a two week holiday – definitely rent. If you’re staying for a year on a working holiday visa you’d want to buy.

There seems to be a magic cut off of around 6 weeks, when it becomes more affordable to buy rather than rent. I worked out for the two and a half months I would spend in New Zealand, renting the lowest budget camper would cost around $6,000. Whereas I could buy one for around $4000. As you can see, even if I didn’t manage to sell it at the end, I would still save money over renting.

It did cost me time though. I spent around 3 days looking at cars in Auckland. And allocated 7 days to sell the car in Christchurch at the end of my time in NZ. These were fairly stressful days, but saved me over $4,000, and so worth it. (I plan to write a more detailed post comparing buy and renting in the not too distant future).

There are some truly beautiful camping spots in NZ

Where to buy
There are a few options when it comes to buying backpacker cars in New Zealand. These are the ones I considered:

From other backpackers
Scour the Facebook groups, backpacker boards and BBH websites to see what’s available, and get an idea of price. It’s a good idea to invest in a NZ SIM card, as it’s easiest to arrange viewings by phone or text.

Bear in mind backpackers aren’t all that likely to care for their car – they know they’ll only be using it for a few months, so maintenance to ensure longevity is unlikely to be prioritised over saving some cash. Check the oil, tyres and fluid levels – this should give you an idea how well maintained its been. Also ask some questions – a good one is about when the cam belt (timing belt) was last changed. If they can’t answer this is a bad sign and be wary!

There is the opportunity to grab an absolute bargain. If people have a flight scheduled, and have struggled to sell their car, they tend to drop their price rapidly. Dealers will only offer backpackers $500-$1000 for their car (they can smell the desperation). So selling to another backpacker for $2,000 is still desirable, even if its worth $4,000.

From a backpacker car market
I looked around a couple of these and must admit I was not impressed. The campervans were old and incredibly overpriced. Even the second hand gear was a joke. Went in to look for a cheap map – they had one, covered in some sticky substance, with torn pages and wanted $15. A new one in the bookshop cost me $12 in the end. (Gives you an idea of their inflated pricing!)

However this is probably a convenient option, if you have money and can’t be bothered to convert a camper yourself, or don’t want to spend time viewing other backpackers cars. If you have the time though, definitely consider other options over the market.

From a dealer
An alternative to the car markets is to try a few dealers, and see what they can rustle up. Dealers know there is a high turnover of backpacker cars in NZ, and cater to this. Ultimately I ended up buying from a dealer, despite viewing cheaper cars.

Yes, buying from a dealer will cost more, but they generally provide some kind of warranty. And many offer buy back agreements, which if you’re worried about selling at the end, can offer peace of mind. Buying from a dealer meant my car had new tyres, a full service, a new WOF and a new cam belt. Additionally, as I was the first backpacker owner, all the equipment was new – no musty blankets or crusty pans for me.

If you want to squeeze every last dollar, then yes it’s cheaper to buy from another backpacker. But I’d say the chances of something going wrong are much higher.

How to sell
Now there’s been some advice thrown around that you should buy in Auckland and sell in Christchurch. And it seemed that everyone was following that advice when I came to sell my car. There were loads of incredibly cheap cars available in Christchurch, and competition was fierce! Additionally, everyone looking to buy was in Auckland – I had countless messages from prospective buyers asking if I could bring it up to the North Island. 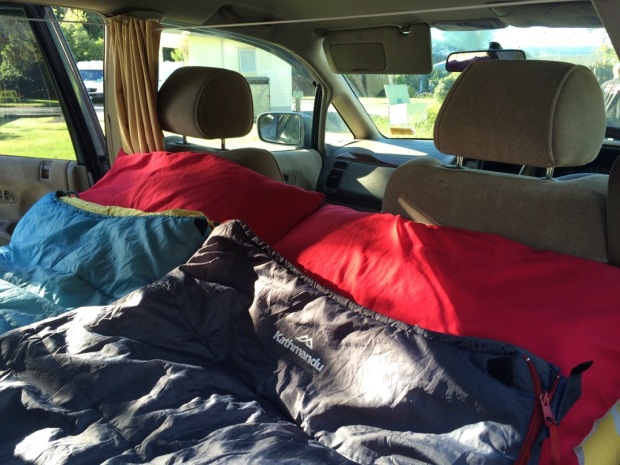 Sleeping in the back of a car takes some getting used, but the independence is wonderful!

Use Facebook
There are a couple of Facebook groups set up to support backpackers to buy and sell cars. This is a good place to advertise your car. With other sites, such as backpacker boards, it’s hard to post pictures, whereas Facebook is well suited to this, meaning you can make an ad that’s nice and visual.

Trade me
Better for getting a local interest. If you have a car, rather than a campervan, this is probably a good shout. It costs $40 to list your car, and I imagine they take some kind of fee after you’ve sold as well. I must admit I didn’t list on trade me, to avoid these additional expenses.

Price Drop
If you’re not getting much interest in your car, consider dropping the price, and sooner rather than later. It’s better to sell to another backpacker for a bit less, than get $500 from a dealer the day before your flight! Obviously if you have time to wait around, this is less of an issue.

One thing I would advise all backpackers is to budget for not being able to sell your car while planning your trip. I had enough funds so that if I wrote off the car, or couldn’t sell it, I could still afford to continue the trip. If the future of a trip depends on being able to sell a car, I imagine process would be a lot more stressful.

Just remember, however you get the car, it will truly enhance your experience, and will be well worth the time and effort you put into acquiring one. Happy buying!