Although Bali had been scheduled as a “holiday” from my long term trip. When I heard it was possible to hike up the highest volcano on the island, I thought ‘heck I enjoy walking, this will add to the relaxation’. How wrong I was! 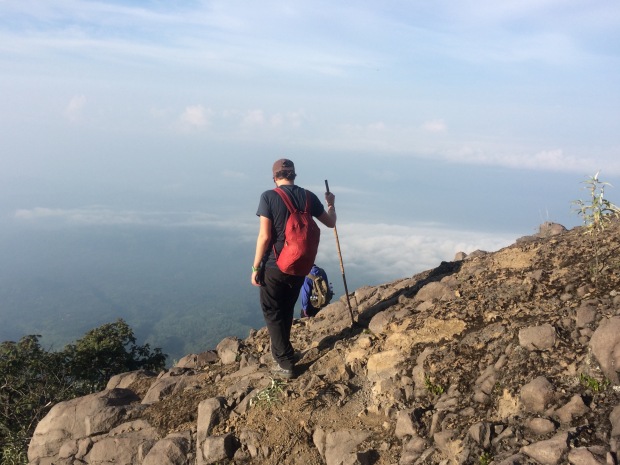 Mt Agung stands at 3031m, making it the highest volcano in Bali (some records suggest it’s higher, but it lost a fair bit off the top after an eruption!) Many tour companies in Ubud offer tours to climb Agung for sunrise, as well as the standard Mt Batur sunrise trek.

It was actually quite difficult to book a trip to Agung. When I approached many agents they just looked at me and said “Agung? You want to climb Agung?! It’s very hard! Why not do Batur?” (Mt Batur is another volcano on Bali, and is generally the most popular, making it crowded and a bit of a tourist trap).

After finally convincing the agents I really wanted to climb Agung, and trying to reassure myself that it’s hopefully not that hard. I’d trekked in the Himalayas after all, surely that’s harder than a hiking up a Balinese volcano (wrong again!)

The Routes
There are two routes up the mountain. One which starts at the Pura Pasar Agung Temple and takes around 4 hours up. And another one that begins at the Besakih temple, and takes 6 hours up. The latter goes to the true summit, so I had my heart set on that one.

After talking with an agent, I was pretty convinced I was booked on a trip going to the summit. I paid my 600,000 IDR, and off I went to rest, ready for my 11pm pick up later that night.

The Drive
All I can say is our driver had really mastered the Balinese style of driving. Speeding up excessively, to break hard, overtake and wing it round a blind corner. I had hoped to get some sleep enroute, but that went swiftly out the window, and I actually arrived the trail head feeling utterly nauseous. Travel sickness medication is an absolute must!

Once we arrived I quickly realised we were at the Pura Pasar Agung Temple. The wrong trail! It was too late to get to the one I had wanted, and there was no way I was getting back in that car, even if there had been time. Instead I abandoned my dreams of reaching the true summit, and accepted the crater rim was still (pretty much) the top.

I’m not sure how this arose. Whether the agent screwed me over, and charged me for the more expensive longer route, only to book the shorter one. Or if the guide didn’t want to do the long route (I’ve heard this is can be a problem). Either way I had nothing in writing, and it’s not unusual for such occurrences to happen while travelling by in SEA. My recommendation is to get everything in writing when booking.

The Guide
I’m not a massive fan of being guided on hikes, and normally I actively avoid taking one. But I’d heard the route was fairly difficult to find, and the terrain challenging (especially at night). I’m glad I did hire one in the end, as these points are both true. Additionally the guide carried lots of food up for us, and started a fire to keep us warm. He also provided walking poles made out of bamboo, which were incredibly helpful.

A warming fire while waiting for sunrise

The Ascent
The walk up is steep, but steady. If you’re relatively fit, it’s not too hard. The first half of the climb is in the forest, but it goes straight up the volcano – no fannying around with zig zags in Bali.

The first part took us around 2 hours with a number of breaks. We actually took many more breaks, at the direction of our guide, than we would have hiking alone, which was reassuring.

The next part of the climb is over boulders and the route isn’t always clear. I think it would have been fairly tricky finding the way without a guide during the day, and impossible at night.

Then came the scrambling. I love a good scramble, so this was great for me. But less experienced hikers may find this part a bit sketchy, especially as it’s all by torch light.

Finally we reached the top! In less than 4 hours, which meant we actually had a long, cold wait for sunrise. Thankfully our guide had predicted this, and had brought up some wood to make a fire and warm us as we waited.

The sunrise was pleasant, but unfortunately the clouds obscured much of the view. It was nice to see Rinjani (on Lombok) though. 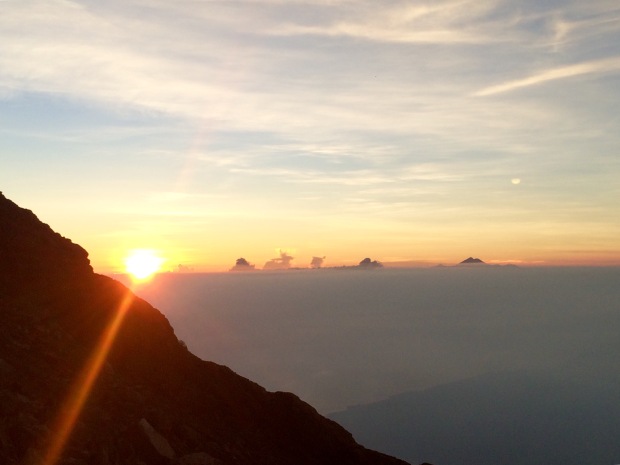 The Descent
This is when things went a bit tits up! The descent was horrible! There’s lots of lose rock, and it’s very easy to lose your footing. No matter how grippy your boots are, you’re going to slip all over the place.

Terrified of falling, I slide down various bits on my bum. My theory being; I’m pretty much guaranteed to fall at some point, so I’m going down by choice! The route is incredibly steep, making the whole descent a nightmare.

Getting down the scrambling section was by far the easiest, as the boots gripped the rocks and boulders well here. Plus you’re using your arms for support.

For me, the very worst part was actually the forest. By then we had been going for 8 hours, with no sleep, and I was getting exhausted. My legs wouldn’t do what I wanted them to do, and there were lots of little nut type things on the forest floor, which was like walking on marbles!

I was so relieved to reach the bottom, after 4 hours descending in terror. I couldn’t believe that a sunrise walk in Bali was one of the scariest things I’ve ever done.

Descending for four hours in utter terror was not too fun

My advice is – if you’re an experienced hiker, want to beat the crowds and aren’t put off by a horrible descent, then head for Agung. Just make sure you get an agreed route, etc in writing when you book. If you’re not a walker and/or hate descending just do Batur. From what I hear the down is also pretty bad, but at least it’s only two hours!