One of my Christmas gifts last year was money towards a stay at the Marina Bay Sands in Singapore. My boyfriend visited the city in 2012, and was adamant he would be back one day to swim in the MBS infinity pool. So we booked a nights stay in February 2016, and this is what I found. 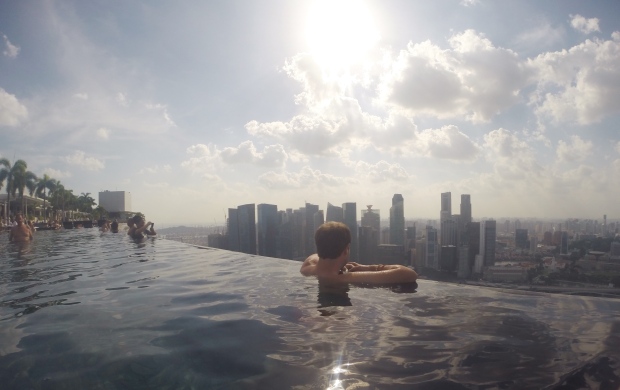 The Pool
Often thought of as the highlight of the Marina Bay Sands, the infinity pool on the 57th floor really is a sight to behold. It’s 150m long, and offers a wonderful city backdrop to your swim. I also enjoyed sampling my first Singapore Sling from a nearby sunbed. 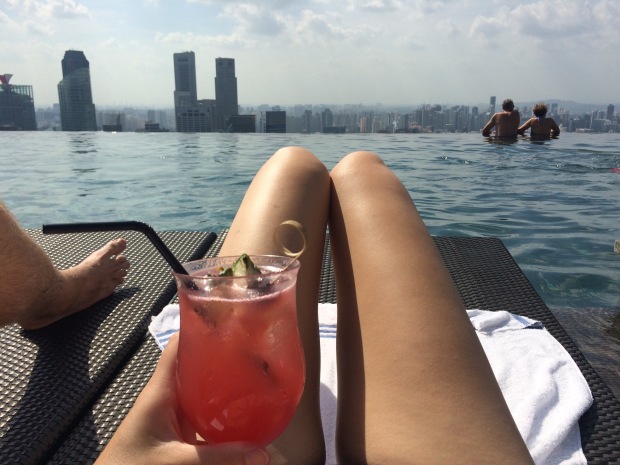 Despite only being open to guests at the hotel the pool seemed to be constantly crowded. Especially in the afternoon. Also be aware that you can’t actually swim the length of the pool as its separated into sections.

The vast majority of the guests were Chinese, and seemed to take it upon themselves to break every pool rule (repeatedly). The pool attendants did their best to keep things under control – but all the whistle blowing meant it was difficult to relax. And one occasion I turned around to find two girls stood on my sunbed (covered in my personal possessions) taking a selfie. 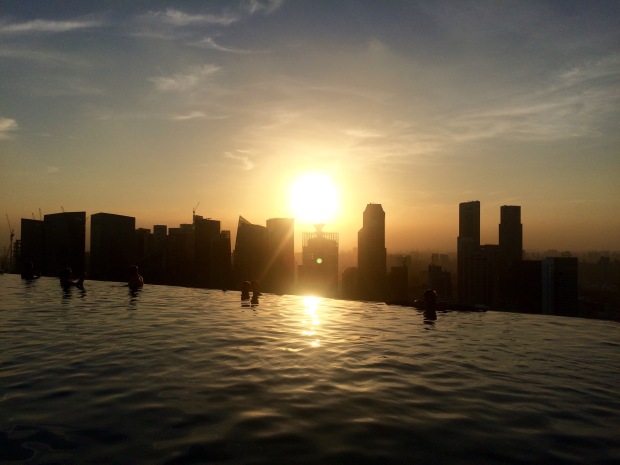 The Room
We opted for the premier room which cost about S$30 to upgrade from the standard deluxe. The room is meant to be slightly more spacious than the standard, but my main reason for upgrading was the free standing bath tub. I love baths! It’s the ultimate relaxation for me. And the standard rooms only had a shower.

On the whole the room was nice and the view was lovely. Incidentally we didn’t pay for a city view room, which meant we had a view of the gardens by the bay which I would say was just as good.

There were a few let downs, for example, I found a rather large hole in one of the towels. Not what is expected given the cost of the room. And it’s not possible to use the fridge unless you pay S$10 for them to empty it, as everything is on timers.

I’ll be honest and say it didn’t really feel like a 5 star hotel, but rather a good 4 star (aside from the holey towel!)

The Hotel
The hotel itself is pretty huge, meaning it’s fairly impersonal. It’s also a bit of a circus – very busy with guests and random tourists just having a look. There is a possibility you will get hit on the head with a selfie stick.

However, there is absolutely everything you need in one building, shopping, food, casino, spa, nightclubs swimming pool, etc.

Restaurants
The food was variable. My favourite meal was the Cheese and Chocolate bar in Club 55, which was excellent. I also tried the pizzeria in the complex, which was nice but not fantastic. Lastly the breakfast was a let down. We opted to eat up by the pool, and the food was overpriced and poor quality. Also you cannot add the food to your room bill from the pool, which meant my boyfriend had to go back to the room to get a card.

Costs
Singapore is renowned for being an expensive travel destination. So it’s not surprising the costs at the MBS add up. I would say the cheese and chocolate night at S$55 was worth the price. But the pizza and breakfast should have been missed, and cheaper alternatives outside of MBS sought. The room itself is overpriced, as you’re effectively paying to use their awesome pool. Prices for a standard room start from S$419 but remember 7% tax and 10% service charge is added when you check out.

Recommendations
If swimming in the pool at the MBS is on your bucket list, and you’ve got the cash, then go for it. Just be warned everyone else also wants to swim in the pool and it will be incredibly crowded. Be mindful it is expensive, and you’d probably be able to stay at a nicer hotel for less if you’re willing to miss the opportunity to swim in the pool! If you just want to check out the view I’d suggest trying the cheese and chocolate night – see link below for more details: